There has been a tendency in the last few decades, when it comes to land use policy, to ascribe sites only one primary use. Given the challenges that face us around housing, energy, water provision, environmental degradation, air quality, and much more, we can no longer afford to consider these problems separately; we must think, act, and design more holistically, finding solutions that tackle multiple problems simultaneously. It was in this spirit that ‘Reservoir Towns’ was conceived. 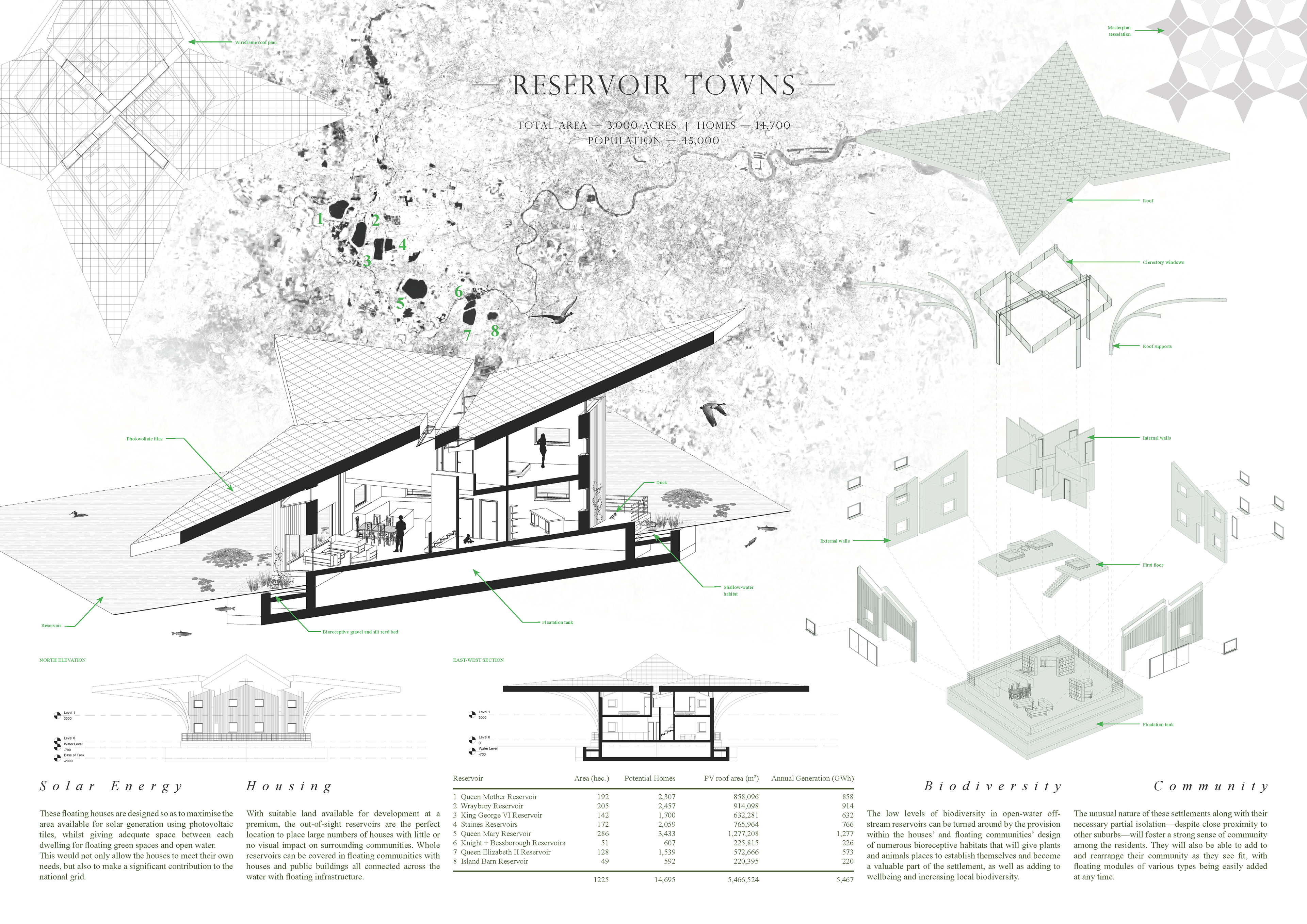 ​​​​​​​The off-stream reservoirs that scatter the outer zones of our major cities are curious places; if they were brown-field sites their land value would be enormous. Their vast surface areas, typically raised out of sight many metres above the surrounding ground level, are only occasionally appropriated with secondary uses.
A few have sailing clubs, some have communities of wildfowl—though most have no secondary use and little in the way of biodiversity. More recently one or two have had floating solar farms positioned across them, though not extensively. But if you can float a solar farm, why not float a house with a photovoltaic roof, or even a few houses, or a whole town?
‘Reservoir Towns’ proposes exactly this—to construct floating settlements on a number of off-stream reservoirs, beginning with those in the Lower Thames Group to the west of London. In the spirit of multifunctionality, these settlements will do the following:
- Provide a large number of extra houses in a high demand region
- Provide a large surface area for photovoltaic electricity generation, contributing to the UK’s solar energy provision
- Significantly increase the level of biodiversity on, under and around the reservoir sites
- Provide a flexible and easy to construct model for housing, with almost all construction taking place off site, minimising disruption and maximising the spread of economic benefit
- Create large housing provision which would be almost invisible to anyone in the immediate surrounding area
- Create sustainable communities with a strong sense of connection to the natural world
- Lessen the need for green-field solar farms on agricultural land
- Provide large amounts of renewable energy at vastly reduced cost than conventional solar farms (due to the sale of properties on which the photovoltaics are placed)

The Biocraft House
↑Back to Top